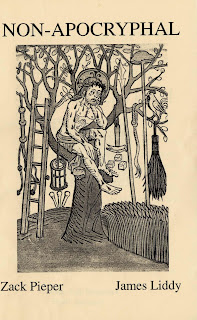 The more I think about it doing contributor bios might be a little forced and strange so maybe I’ll just ramble about the person or something that that person has published.
I thought I’d begin with Zack Pieper since he will be reading in the Red-letter series at Woodland Pattern. Before I ever met Zack he was described to me as a “very good poet” and, occasionally, when that description is tossed around the word “young” is added as if to imply that he’s unknown and/or hasn’t done anything in terms of publishing and exploring his style. But, he is good. All the little publications I have bearing his name fall into the one of the oldest and rarest genres of poetry: re-readable.

Once, a few years ago, I called him for some reason I can’t recall and he was in the middle of writing something involving names from the Passion and Crucifixion of Jesus. He read a few of them over the phone and since it had nothing to do with why I called him I couldn’t offer much insight other than to say I thought they were funny. Not long after I received from either Zack or James Liddy a half-folded booklet with two staples saddling to make the spine. Called simply “Non-Apocryphal” it’s a collection of lines regarding people and ideas from Catholic history and scripture penned by Zack Pieper and James Liddy. It was marked inside as “A Procession (by 2 altar boys)”.

I’m not a fan of collaborative poetry in general mostly because it’s usually done for the sake of one poem and then it’s done online or in a classroom. But rather than attempt to speak to the collective consciousness, this little pamphlet of slogans, statements, and sneers collaborates to affect conversation. But here I am having typed more words than were in the thing to begin with.


My favorite by Liddy is Barabbas “He won the election.”

and my favorite from Zack is Luthur


“Private sin when applicable, public virtue when salable, and possibly a set of modest drive-thru windows for convenience. (if stain glass looks too pricey)”.


Zack Pieper has two poems in Burdock issue one, three in Burdock IV and contributed the special Hazard tribute issue an great piece called “Jim”.
For more info check out the little ditty about him that woodland pattern has up.

Hi, I'm looking for Zack Pieper. The Univ of Wisc email address I had for him doesn't work. Will you please send me his current email address to:
afilreis@writing.upenn.edu ? Many thanks. - Al Filreis, Univ of Pennsylvania

You could send him an E-mail through is Myspace page... I don't know he he hasn't been on in for awhile though... good luck with that, oh and I love PoemTalk keep it up! 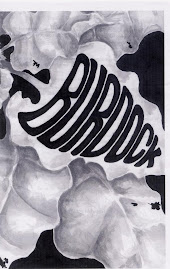